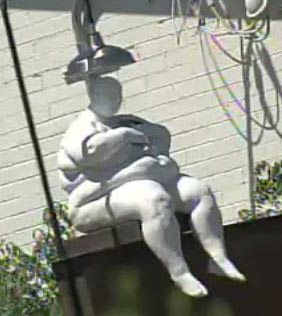 Today I heard about an artists' statue that has some people in an uproar.  This Naked Fat Lady (named Venus) statue is located here in Tempe, AZ (Rural & Broadway).  ﻿The artist of this statue has installed it as part of a renovation to an apartment building he owns.  People like the job he did on the building to improve their property values but it seems some of them don't like the statue.  The artist did go to city hall and got approval to display the Fat Lady but shortly after she was perched on the building people started complaining. 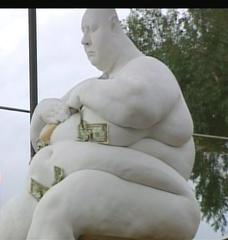 This morning, in an attempt to please the public, the artist has given the Naked Fat Lady a fig leaf bikini ﻿made from dollar bills.  Now she looks more like a fat stripper!  This story was aired on FOX 10 News http://www.myfoxphoenix.com/.  They have a poll asking viewers if the statue is still to offensive.  The numbers at the time of this posting were No 73% and Yes 28%.

Throughout modern time ART has been controversial at times.
Posted by ~Wanda~