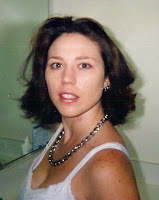 My youngest daughter had a birthday this month﻿ (she's 31 now!).  There are times in the lives of people younger than myself that I find it more difficult to figure out what they would appreciate receiving as a gift.  This dilemma seems to begin when they are teenagers.  I mean REALLY, what do you give a teenager?  I could share some of my age old wisdom... Give them some life advice... But those never go over well.  When they get out on their own and start building a life it gets a little easier.  Then you can get them cool things for their new life as an adult.  When they seem to have their living quarters filled they start appreciating personal things that they haven't been able to purchase in awhile because they have to pay bills every month.  HAHA!  Then they go into the 30 somethings and it seems to become harder again.

This daughter just relocated to another state and it seems that every time I talked with her she was sharing a new recipe.  This is the daughter that DOESN'T COOK!  Recently she asked me to make her a Potato Bag (which I blogged about).  So I thought if she is getting into all this cooking and asked for a Potato Bag MAYBE she would like an apron!  So I collected all the supplies and made her an apron. 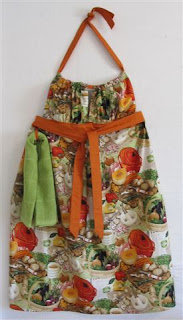 The pattern calls for the long ties to be placed on the half apron but I put them on the bodice apron.  I find it much easier to tie in front of me rather than behind my back.  Isn't having to tie behind your back kinda like a test in dexterity?  I need to SEE what I'm doing!  When you get a project done you HAVE TO try it on and SEE what it looks like!  I was surprised when I tried it on and discovered it has an umpire waist (is it even called an umpire waist these days?)  The picture on the pattern looks like it ties around the waist NOT right under the BOOBS!  Oh well, it's DONE.  As you can see it has a little towel loop, which I thought was a handy feature.

If I ever make another one I'll make the bodice BIGGER, the overall length shorter and the towel loop closer to the center.  This towel loop puts the towel under your elbow which was awkward feeling.

Her comment when asked how she liked it, "It will fit the boyfriend great."  I guess that means she has already given up her cooking career and it's now on the boyfriends list of responsibilities!