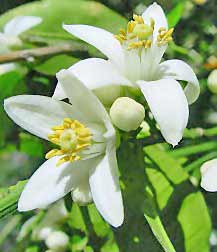 According to the calendar SPRING has officially arrived and it appears very evident here in the valley of the sun﻿.  We've just had a few last days of winter with cold temperatures (at least it was cold to us flat land wimps) accompanied by wind and rain.  But today all of that wintry stuff is gone and the fresh outside air is filled with the sweet aroma of orange (and grapefruit in my backyard) blossoms.  I love that sweet smell!
This SPRING has brought a few personal new beginnings to my family this year. 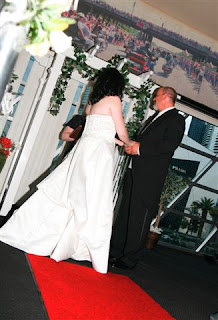 Last week my oldest daughter, Denise, got married.  She became a new bride at the Harley Davidson Cafe in Las Vegas, Nevada on March 14. 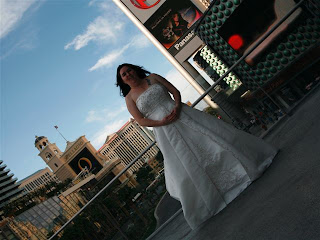 Before Denise was home from the honeymoon her little sister, Priscilla, moved from the valley of the sun to the Rocky Mountains of Colorado to begin her new life.﻿  She has moved up there to help her long time boyfriend with his new business.  The reports I've received from her so far is, "It's F-------  cold!"
And so a new beginning is sprung upon me this SPRING as an empty nester (of sorts) again.  Denise has been married before and Priscilla moved out from under my roof a dozen or so years ago.  That's the first time I became an empty nester.  But when Denise got divorced and Priscilla's boyfriend moved out of state they both depended on us more.  Since I've had previous experience as an empty nester this time will be a breeze and I think I know what to do with myself.  QUILT!!!!
Posted by ~Wanda~

Email ThisBlogThis!Share to TwitterShare to FacebookShare to Pinterest
Labels: Musing